Peeter Rebane and Tom Prior (screenplay, based on the memoir by Sergey Fetisov), Peter Rebane (director) Firebird / 2021

Peeter Rebane and Tom Prior’s 2021 film Firebird which I saw the other day on a virtual broadcast of New Fest (New York Lesbian, Gay, Bisexual, & Transgender Film Festival), is the kind of movie had the US and other countries matured with regard to gays, lesbians, bisexuals, transgender and other alternatives to heterosexual identity decades before now, would have been a wonderful late 1950s or early 1960s romantic film in the style of Three Coins in the Fountain (1954), Sabrina, All That Heaven Allows (1955), War and Peace (1956), or An Affair to Remember (1957)—except, obviously, that none of these events from the 1970s cold war as viewed from Estonia through the Russian occupation of that country had yet to take place. 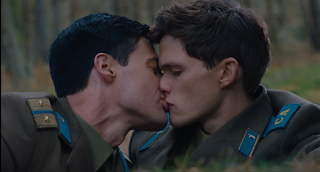 Although we know that for two gay men to fall in love on an Russian airforce base being caught having sex as the young Sergey Serebrennikov (Tom Prior) and Roman Matvejev (Oleg Zagorodnii) do several times in this film, would have meant punishment by five years of forced labor and perhaps worse—certainly in the case of air pilot Matvejev—whose career most definitely would have been destroyed; nonetheless, they seem to have to face many of same kind of dilemmas as do the characters of the straight romantic films I’ve named above, where both men and women must often hide their love obsessions from family, friends, casual observers, and often from one another. Sergey and Roman’s clever sneaking in and out of the senior barracks, local lakes, and visits to Tallinn and elsewhere, are outward not so very different as presented in Firebird from the wartime romances of Here to Eternity (1953) or even later works such as Robert Altman’s M*A*S*H, which is supposed to occur in the early 1950s. And the problems they face in their age and cultural differences is played out in Sabrina, War and Peace, All that Heaven Allows and numerous other works.

Even the fact that Roman finally feels compelled to further cover up the possibility of his affair with Sergey by marrying their mutual best friend, Luisa (Diana Pozharskaya)—who once might have thought of herself as marrying her younger colleague Sergey—should come as no surprise for anyone who has seen or read the dozens of English works such as Brideshead Revisited and Maurice and the known of the scores of real-life Hollywood “bearded” marriages and rumored love-affairs between the likes of Charles Laughton, Spencer Tracy, and Rock Hudson should not be surprised that a military man in Roman’s shoes might make that decision, no matter how devastating it clearly is to his younger lover. The two still manage to get away together for a substantial period of time, buy an apartment in Moscow, and enjoy the company of less judgmental friends from the world of  theater and other arts.

The evil KGB members determined to discover every dirty secret and expose it to the restrictive society at large is not truly that different, is it, from the horrific gossip columnists such as Hedda Hopper and Louella Parsons, the numerous political figures determined to out anyone they could find for gay sexual activities and/or suspicious political values, and the determined police forces both in the US and England that were bent on making life hell for anyone visiting a gay bar or homosexual outing? Is an accusation from a supposed friend which leads to many of the covert acts undertaken by Roman so very different from the wives and husbands in dozens of heterosexual films from 1930-the present who hire private eyes to spy on and terrorize their own partners?

What makes this film directed by Estonian born Rebane so interesting is that it has become so lovingly cinematically normalized that if you were blind to the fact that it is often two men who are ecstatically engaged in sex, busily introducing each other to the ballet (hence the film’s title), theater, and opera, and writing each other love epistles, you might not even know this was an LGBTQ film. The writer and director have almost completely erased the usual psychological traumas of gay self-acceptance, the lure of mutual gay attractions—although it is quite clear that one of Sergey’s fellow students is more than a little attracted to his peer and peeved in his seeming lack of interest—or exploration of the childhood parental abuse which helped to make their sons “queer.”

There is a childhood memory of guilt on Sergey’s part for refusing supporting his best friend after the boy being punished by his father for being queer, but the trauma it plays in his life is far less significant than a very similar incident is, for example, in Alan Ball’s Uncle Frank (2020).

In this film, just as when Gary Grant deeply kisses Deborah Kerr, so when the beautiful male leads Oleg Zagorodnii and Tom Prior lock lips we register a sense of joy, our hearts fluttering to watch them engaged in discrete sex, facial gesturing their orgasmic pleasure in one another’s bodies. And until they are written up in an unsigned report slipped to the KGB there is hardly a moment when they are not developing photos of one another, studying Shakespeare, watching for the first time—in Sergey’s case—Firebird, that these two can keep their hands (feet, legs, and lips) of one another.

Even when they are restricted from revealing their physical passions, both are restlessly eyeing one another or, in Sergey’s case selflessly coming to terms with having lost his bed mate by embracing a more spiritual sense of love through sharing Roman with his wife and son.

The sets by Aadu Larnbot and Peeter Sepp are quite lovely, and the costumes by Mariatta Nissinen and Mare Raidma are nearly perfect for the drab days of the Russian imposition of the cold war. And finally, there are lovely landscapes and views to take in. So this romance really does splendidly by its genre. 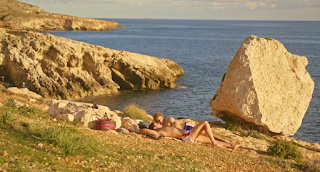 I’m sure there are many who will dismiss this work for showing no great sense of camp humor, for ignoring the deep angst that both its central figures obviously feel about having to abnegate their sexual responses for heteronormative values imposed upon them. And certainly this film displays little in the way of experimental cinematic techniques. It’s wonder is that for being such a lovely tale of gay romance it is otherwise almost completely true to type, which is perhaps precisely where Firebird is most radical. 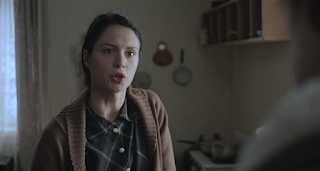 Otherwise, a bit like the soap-opera this work threatens to but fortunately never actually becomes, we boo the KGB officer, and detest the military tortures just as we would in any straight film. Perhaps the most unlikeable character, it turns out, is their friend and wife Luisa, who having lost her husband to his service in Afghanistan, turns out to be as homophobic as the society in general when she finally faces off with her husband’s other lover, Sergey. Whereas, he has been able to make sacrifices of his love for her, she is only bitter that her husband as ever shared the same bed as her former friend and is furious for not being told of a relationship that she would surely have done everything in her power to stop. Perhaps the trauma missing in this film may show up in the next generation if she continues to express her bitterness of having to share his father with a fag to her son.

It is not the ground that this film seeds that make it interesting, but the same-sex gender of those who tend its predictably pleasant pastures.

Posted by greenintegerblog at 4:16 PM