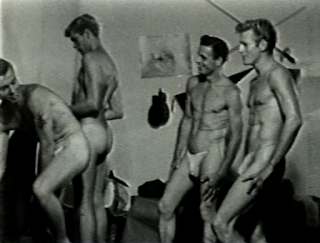 The two senior fraternity members lounging around the house in, what else, their posing straps encounter two new pledges, immediately demanding they strip to their own posing straps (didn’t everyone wear such under pants penis coverings in those days?).

The seniors pull out their boots and demand the pledges shine them to a black gleam. Of course, the finished shoes do not at all meet the demands of the seniors, who pulling out the ping pong paddles spank the newbies. 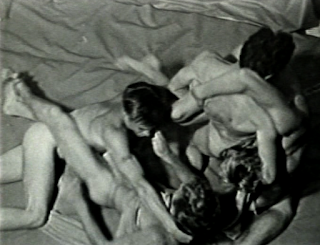 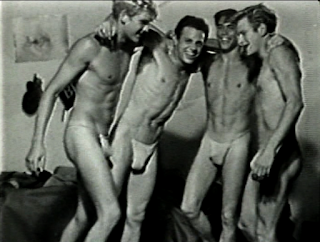 In the very next instance, the pledges eyes are covered with towels tied round their heads while the two seniors spray whip cream over their younger friends’ mouth and noses, resulting in a mass wrestling mass which soon becomes a pile of heaving flesh—the perfect outcome for their at-home viewers. A color promo suggests that before the final cuts there was also some towel slapping.

Now they’re all friends and equals.

Posted by greenintegerblog at 6:57 AM