washing away the mask

Frank Capra’s silent film of 1928, The Matinee Idol, was long thought to be lost, and was only rediscovered by accident when Cinémathèque Française in the late 1990s was given a gift of old films kept in a weed-covered out-building. The was restored in 1997 and is now housed by the Cinémathèque Française and Cineteca di Bologna. A DVD of the restoration is now available from Columbia Pictures.

This film is interesting in how it reveals Capra’s early development, in particular his sense of the injustices against the “common man,” as he would describe it, even if his vision of everyday American life is perhaps based on a mythologized vision that parallels other such celebrations of common day life by sentimentalists such as Norman Rockwell and populist writers. 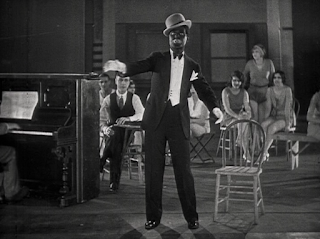 But this film is perhaps even more important for its reiteration of early 20th century racism—the film’s hero, Don Wilson (Johnnie Walker) is a popular actor who performs in blackface like Al Jolson—and its remarkable depiction of a gay sissy that does not at all conform to the standard cinematic representations of the day.

The general plot is quite a simple one. Worn out from his performances, Wilson’s producer, director, and a friend have suggested that he take off a weekend for a country trip, where the four of them accidentally come across the local theater presentation which seemingly draws a crowd of nearly the entire community. By accident, Wilson, mistaken for an actor seeking work, is signed up to take a small role in the play, speaking only he lines of a dying soldier, “I love you,” which is answered by a kiss on the lips by Ginger (Bessie Love), playing his girlfriend. The visiting New Yorkers howl at the performances’ numerous gaffs while the locals sit in total wonderment and enjoyment throughout the play, revealing in fact the true lack of recognition of what lies at the heart of theater by the supposedly “sophisticated” city folk. 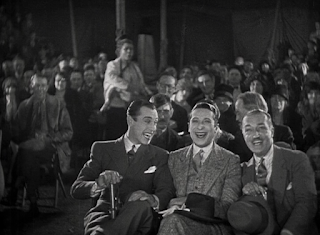 Ginger’s theatrical presentation is an immense hit in the provincial town in which she and her father, the writer of the play Jasper Bolivar (Lionel Belmore), reside, where the “lower class” hicks appear to take history—even punctuated as it is in the Bolivar company production with melodramatic flourishes and theatrical mishaps—far more seriously and treat the storytellers/actors with greater reverence than the New York audiences who simply laugh at and deride their art because of its honest primitiveness.

Cruelly, the visitors together determine to take the whole company to New York to perform in Wilson’s play as a comic routine—without revealing to the actors, of course, their true intentions. Although Wilson is fired after his performance, in part for contributing to the comic elements of the production by his seeming ineptitude and his repetition of the words “I love you” so that he might be kissed by the pretty local girl again and again, his cronies deviously demand that the entire cast be retained, forcing the actor to play two roles, the New York blackface artist and the happenstance actor who has given Ginger the name of Harry Mann.

Although we certainly recognize this film’s use of blackface as yet another example of early 20th century US racism, because this is a silent film we do not have to encounter the vocal imitation of a white man pretending to intone the dialect and linguistic choices of a black man nor listen to any racial comments made on the side to his audiences. Basically, the blackface is used in this film as a mask or cover to hide the real identity of Wilson from Ginger with whom he has fallen in love. Moreover, in the last part of the film, when Wilson in blackface is necessarily forced to “replace” Harry Mann on stage in the Civil War drama headed by Ginger and her theatrical company, the representation of a black within the context of the play takes on new significance. And later, when sorry for his abuse of the girl and her theatrical troupe, he tries to salve her anger as she stubbornly stands in the rain, his disguise washes away to reveal another being beneath his makeup, an incident which long before Ralph Ellison’s transformational exploration of black identity in a majority white world, hints at that same invisibility while at the simultaneously making a rather ironic indictment about it since the figure in this case is a white man pretending to be black. 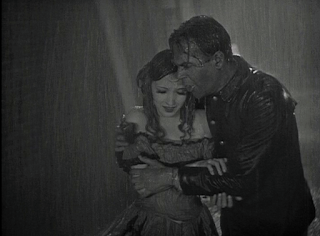 Just as interesting, the regular small town company members treat one another with a kind of innocent respect that appears the city folk cannot imagine. In particular, one of the actors, Eric Barrymaine (David Mir), who we first discover crouched inside his suitcase—either suggesting he is attempting to dress in utter solitude or hinting at his totally closeted existence, perhaps both—is clearly what the other films I discuss of this period would label as a true sissy, or, given his continued effeminate behavior throughout might even describe him as “flaming queer queen.” The intertitles introduce him with the words: “Eric Barrymaine—who played deep-dyed villains with a soprano voice....”

Nonetheless, his peers who describe him as a great actor do not even seem to notice any oddities about his behavior, and are stymied when Harry/Don disparagingly asks about him, “Who is that, Helen of Troy?” 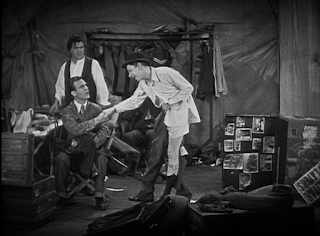 As Richard Barrios has written about this fascinating figure in his book Screened Out: Playing Gay in Hollywood from Edison to Stonewall:

“Whatever his personal life or theatrical gifts (his bows look more like curtsies), outsiders. ...Later, when he first sets foot in a Broadway theater, a burly stagehand immediately gets the message, suddenly mincing, batting his eyes, waving one hand flittingly, and calling out, ‘Whoops, dearie!’ Eric, who doesn’t understand this mockery, seems hurt and confused—Capra seems to imply that the man is still a stranger to his own sexuality, or at least to the stereotypes he seems to evoke.” 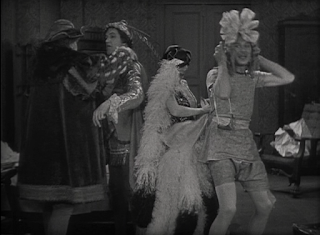 Taking it even further, for a masquerade party which Wilson throws to introduce his New York cronies to the country bumpkins, Eric dons a Mary Pickford wig of curls and a short dress without his peers even bothering to comment on his choices. Much like the lesbian couple working with the theater company in another Bessie Love vehicle, Charles Reisner’s Chasing Rainbows (1930), or like the sissy stage manager Clarence in Al Boasberg’s 1933 film Myrt and Marge, the homosexual figure in Capra’s film has been totally assimilated into the society of his fellow small town thespians, who not only don’t seem to mind but don’t even register his “differences,” while fully recognizing his special talents.

Reminding ourselves that this film was almost lost, we might well wonder, as Barrios suggests, how many other films of the period, lost or forgotten, took such far different attitudes toward queer behavior. Given the late date of its rediscovery, Vito Russo could not have known of this movie, and he makes no mention of either Chasing Rainbows or Myrt and Marge in his The Celluloid Closet; yet these films demonstrate that at least on a few occasions, but perhaps far more than we still recognize, LGBTQ figures were not simply derided, dismissed, or killed off in the movies in which they appeared, but were loved and embraced by the smaller societies in which they thrived. It is precisely this “other” view of homosexuality and simply the vast numbers of gay characters presented on film, negatively and positively portrayed, that led me to explore this terrain in such a maniacal manner. No matter what one thought of homosexuality and other disparate sexualities, they mattered enough to catch and present their images over and over on celluloid. And the very codes created to obliterate their existence only appeared to encourage directors and writers to find news ways of demonstrating their power in a society that generally did not wish to be reminded of their existence.

Posted by greenintegerblog at 6:10 AM