Long before two sisters from Ohio arrived in New York City—one of them determined to become an actor, while the elder, less conventionally attractive one serves as their manager—and seeing their new quarters lament their decision to have left home in works adapted from Ruth McKenney’s stories remade into the play and movies My Sister Eileen (1940 on stage and 1942 and 1955 on film) and Leonard Bernstein’s hit Broadway musical Wonderful Town (1953), the Michigan sisters Hank (Harriet) Mahoney (Bessie Love) and Queenie (Anita Page) settle down with anticipation and second thoughts in a barren Empire city hotel room where they plan to take up residence until they make it as a singing-dancing duo on Broadway. They have an advantage of knowing Hank’s old boyfriend Eddie Kearns (Charles King), who has pioneered the Broadway trek and made it good, with noted producer Francis Zanfield (Eddie Kane) having just bought one of Eddie’s new songs, “The Broadway Melody” which he plans to perform with the two sisters in Zanfield’s upcoming production. They are at a disadvantage for having a lack of talent that they couldn’t even imagine. 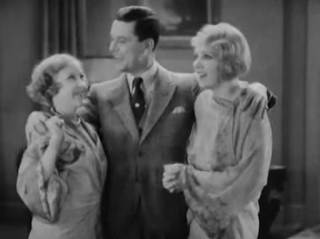 Their wailings and clumsy moves almost get them thrown out of their audition, Zanfield keeping on Queenie for his show only because of her looks. When Queenie hears the news she quietly makes a deal with Zanfield to keep his sister in the act if the two work for one paycheck, begging him, when he agrees, not to let her managerial sister know about the bargain deal. He agrees and Hank pushing her way into the pretend contractual details is delighted for the easy negotiations. But soon after, in rehearsals, even their paltry breakout scene with Eddie is cut, and the girls are almost ready to be tossed back onto the streets until a leggy blonde falls from platform upon which she stands as eye candy while a self-centered tenor warbles out a song below, as Queenie is quickly whisked into her place. 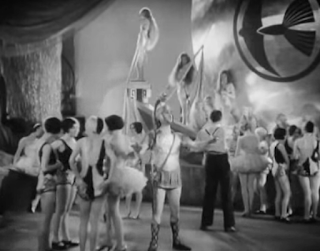 Except for several stagey but unspectacular theater numbers with songs by Arthur Freed and Nacio Herb Brown—the scenes that evidently helped this basically bland movie offering win the Academy Best Picture Award, the first given to a sound film—that pretty much sums up this piece.

The rest of the work consists of a meaningless melodramatic story wherein the film’s dominant threesome, Eddie, Hank, and Queenie—all deeply caring for one another, torture their fellow lover and sisters in order to protect them from the truth. Although Eddie and Hank begin the film as a couple destined to marry, upon seeing the grown up Queenie, Eddie is unable to resist her and she him, both he and Queenie, however, so determined not to let Hank know that they create rifts in their relationships, Queenie in particular pretending to be interested in the attentions of the wealthy cad Jacques Warriner (Kenneth Thomson) who awards his new girlfriend with a diamond bracelet, an glamorous apartment and other promised gifts in exchange for.... She, Hank, Eddie, and we all know what it will end up, which is why the motherly Hank and Eddie—who sees Warriner as a challenger—gang up against Queenie to protect her, she, in turn, insisting upon courting Warriner to hide the truth of her and Eddie’s newfound love from Hank. 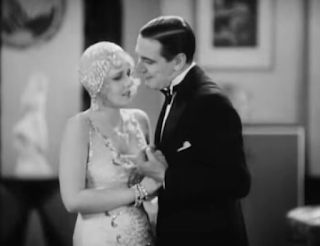 Only when, at the last moment, Hank puts the missing links together does she pretend to be disinterested in Eddie sending him off to save Queenie from the final coils of the reptilian playboy around her lovely body. Eddie rushes into the room where Warriner is engaged in making his pass  to save the day, but leaves it with a sore cheek where the villain has slugged him, and a bad hip where Warriner’s guest have landed him on the hallway floor. But Queenie. finally ready to fess up to their love, leaves with him, and soon after the two are married, Hank having gone back on the local vaudeville circuit, unable to shake her gypsy theatrical aspirations.

Indeed, the whole film is rather uninspired and not a great deal of fun, except for the backstage goings on where, for example, after the narcissistic tenor keeps demanding that the spotlight be thrown upon him, the lighting operator literally throws the spotlight down upon the singer, nearly killing him. Hank and a nasty blonde chorine have several near-cat fights as the blonde, Flo (Mary Doran) finds ways to deter Hank and Queenie’s act; by the end of the film, ironically, Hank has joined up with the nasty peroxide-minded girl to tour the provinces. Indeed, the film seems determined to make fun of it stereotyped subluminaries as it mocks the speech impediment of the girl’s stuttering uncle Jed (Jed Prouty); the endless drunkenness of one of Zanfield’s investors who his partner has nicknamed “Unconscious,” a man so confused that he will evidently follow anyone male or female off for an imaged sexual interlude; and, most importantly, the gay sissy costume designer Del Turpe (Drew Demarest) who is given a far meatier role (with three long scenes) that would be allowed a year later after the more codified but still not entirely enforced list of moral and sexual restrictions took effect.

By 1930 panzes, as sissies were described, were not allowed to have general contact or verbal communication with their heterosexual counterparts, while in this 1929 film Del has full conversations with his straight adversaries, at one point after he leaves in a huff, a chorus girl intoning: “Don’t mind him. She’s just one of us.” If she is mocking the gay costumer as being “one of the girls” she is nonetheless expressing a kinship with a gay man rather than the utter segregation of such figures that will occur only a few months later.

The two scenes in which Demarest “shines” have been quoted fully in both Vito Russo’s and Richard Barrios’ compendious studies of early queer cinema, so I won’t repeat them again in full. One involves the outlandish large hats he has created for his chorus girls, who find it difficult to wear without crushing as they leave their dressing room for the stage, the fact of which brings the fussy designer into confrontation with their careless exit. A large-framed wardrobe mistress (a figure that in later prison movies might be perceived as a lesbian bull-dyke), however, stands in his way, hands on hips, to remind him “Say, listen. I told you they were too high and too wide.” 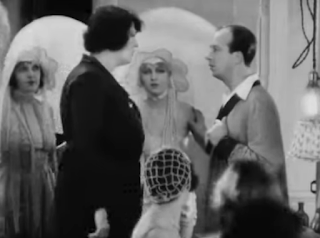 Clearly used to her assaults, Del hissingly retorts: “Well, big woman, I design the costumes for the show not the doors for the theater.”

Big woman comes back at him: “I know that. If you had, they’d have been done in lavender.”

Yes this is offensive, relying on the fact that we know that by associating him with the color lavender, she was really throwing back in his face something close today to calling him a faggot. But somehow the very fact that his scene and others in the film call the viewers’ attention to the fact that there are gay men and possibly lesbian women working in the theater is of far greater importance than any name-calling involved. Even if they are represented as absurd figures of derision, gays are not yet entirely invisible on the screen in 1929 (or throughout the early 1930s before the code got serious in 1934, banning even sissies from celluloid).

In the first scene we feel that at least the two figures in dialogue are cohorts, fellow workers behind the stage action, but in the second scene those of the heterosexual hierarchy square off with our exaggerated queer, mocking him rather than just pointing up his difference.

Bearing an ermine coat over his arm, Del presents Zanfield, surrounded by admiring investors, with a bill for two thousand dollars. Shocked by the price, the producer in a loud voice proclaims he will not pay such a price for a coat worn by an actress for less than two minutes.

The often giggling costumer retorts: “But you said ermine. It’s a gorgeous garment, isn’t it?” as he looks to the two investors to Zanfield’s right for confirmation.

The heavy set man outrightly mocks him, imitating a stereotypical gay lisp and baby talk, neither of which our huffy hero has displayed in his statements, “Oh! Isn’t it gorgeous? In fact, it’s gorgeoussest thing we ever saw, you sweet little cutie.” 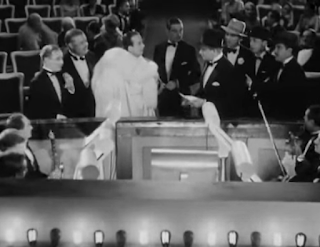 Rightfully offended, Del marches off, now half-wearing the coat, while the fat man’s drunken companion begins to follow him as in his repeated chases throughout the film after sexual satisfaction, his partner pulling him back to address him as “Unconscious.” Is story writer Goulding suggesting that even the he-man, in his unconscious state, may be interested in trailing after queer sex every now and then, especially in after they can wake up after and declare “I was so drunk last night I didn’t know what I was doing?”

Clearly, the script was not suggesting any such thing, but its accidental implications are nonetheless fascinating, particularly since such interchanges between gay and straight would soon not be permitted for several decades except in language hidden under and within the pretended “normalcy” of the plot. By allowing figures such as Del Turpe to storm off and on screen, the actor and writers were declaring, if nothing else, his right to be there, granting him at least a layer of recognition that he and others like him existed in everyday life.

And surely Del and his kind were a lot more fun to be around than the unnecessarily suffering ninnies at the center of this pic. And it’s sad that soon cinema producers, directors, and writers would feel it necessary to close those lavender doors.

Posted by greenintegerblog at 9:46 AM