the monsters of a local bar

Ted (Mitchell Welch) enters a seedy bar just for a gin & tonic where is suddenly waylaid by a man, Jack (Kevin Hunt), half talking to himself and half to anyone who might listen about all shorts of things that point to clear paranoia. 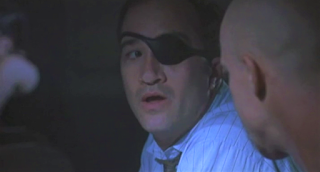 He begins by seeming disturbed by the fact that people keep secrets inside, that an old friend with whom he used to play “hoops” turned out to be “fag.” All this time, he argues, he it hid from me, and now he’s got one of them “new lifestyles.” Obviously, Jack is more than a little homophobic, as he also stares off in the near distance where two men playing pool appear in their movements and gestures with regard to one another suggest that they may be gay.

After attempting to find out why Ted as a patch over his right eye, what was the “accident” that made him lose he sight, he’s frustrated by the fact that Ted has no interest in sharing and attempts to walk away from him.

Yet Jack follows him to the new table Ted has selected as he quickly begins to reveal his true phobia, lycanthrophobia: the fear of becoming a werewolf.

He tells the story that one night he had a dream that he was a predatory animal running on all fours in the dark, and then suddenly woke up—in a stranger’s house curled up on the floor completely nude. “I was so afraid I was going to find someone’s mutilated body, I just ran out of there.”

Jack seems to think that werewolves, which he may secretly be, hide their fur on the inside of their skin. And to rectify his fear of becoming such a beast, he now is on look out for signs of werewolves who appear as normal men, ready to shoot them with silver bullets and the gun he carries with him. 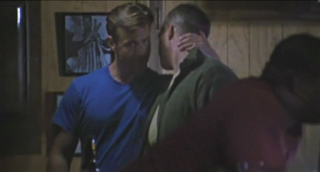 Moreover, the two men we have seen in the background, possibly homosexuals, Jack tells his new “friend” are absolutely werewolves, Jack determined to shoot them soon, perhaps this very night.

Terrified by what his uninvited guest has just told him, Ted attempts to argue that perhaps he’s mistaken, he might be misreading the signs, and on all accounts the execution Jack has planned be delayed.

Jack is not be convinced, but in a comic moment, declares he has to take a leak, asking Ted to keep an eye on the monsters while he visits the bathroom. 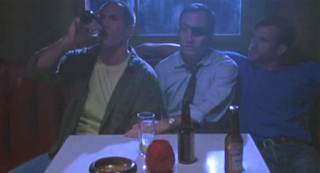 The very moment Jack gets up and leaves, the two men previously playing pool, Frank and Bruce, move into Ted’s booth surrounding him on both sides, threatening him for his friendship with Jack. Jack, it appears, has been staring at them for some time, following them, checking them out, and they are certain that he is gay, something these two homies cannot abide.

Evidently devoted homophobes, Frank (Jay Lacopo) and Bruce (Brian Fritzpatrick) now threaten Ted, who they insist must also be gay, worthy of a good old-fashioned bashing after they rid the world of his bathroom-going “friend.”

Again, Ted tries to reason with these new monsters, insisting that Jack is not a friend, that he has just come into the bar to get a drink, and that, in fact, he is straight. All to avail. Frank rises and heads to the bathroom while the other keeps tabs on Ted. Bruce, speaking the usual hetero hate speech suggests that fags are good at giving head so that before he knocks Ted’s teeth in perhaps he should see what he’s got. 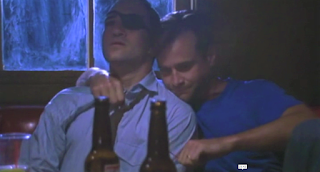 In the bathroom, Jack challenges the new visitor to the john, who is ready to beat up Jack until his intended foe turns with a knife in hand, throwing Frank to the floor and plunging the knife into his chest while letting out a monstrous howl. Distressed by the sounds, Bruce lets go of his chokehold of Ted’s neck, and gets up to check out what’s going on, Ted rising to shout out in words reminiscent of Jack’s: “You think you know what’s inside. You have no idea what’s inside. ...Go back there. It’s all over the floor back there. It’s something we all in common. You believe in monsters?” Bruce wrestles him back to the booth to tell him he doesn’t care what he has inside, as he stands to face the other monster in the room.

At that very moment Jack appears leaving the toilet facing off with Bruce. Ted rises, the room spinning with suddenly no one in the place and he moves toward the door to escape. We hear a single shot, surely one of Jack’s silver bullets put through the heart of Bruce.

The film is, quite obviously, a statement about all our “phobias,” as the words appear on the screen:

“...phobia is a learned behavior.”

This is a cheaply made short, with hardly any cinematic production values except for its creepy, horror-tale like music by Nick Pierone. And its state thematic, although laudable, is hardly subtly expressed or even fully established since all the bar’s patrons seem to have come in from some unproducible absurd episode from Rod Serling’s The Twilight Zone. What is interesting is its connection of homophobia, a curable disease, with the werewolf myth, which from it’s earliest roots in the 1941 film The Wolfman, according to film critic Harry M. Benshoff, writing in his Homosexuality and the Horror Film, saw the condition of man turned into a predatory beast—certainly a condition that might easily apply to womanizing heterosexual men, but which in the 1950s increasingly came increasingly to be applied to gay men who were even more dangerous given their seemingly predatory behavior because it was hidden away from the public—unlike the situation of the vampire or the human-created monster Frankenstein, “is a disease of the mind [that] can be cured.” And in this sense one must argue that Harry Victor’s Lycanthrophobia is most definitely an “educational” gay film, one that even in its credits breaks down and repurposes even its title—

—to relay its educative message.

What also may be of interest is that the innocent-seeming Ted, who stumbles into the nest of sleeping monsters may in fact be, in fact, the reason their sudden coming to life. The one-eyed man seems to attract all three, the dormant werewolf and the two homophobes. Somewhat like an unintentional Homeric Cyclopes, Ted, whose girlfriend has gone away at least for the weekend, lives apart and away from restrictions (at least momentarily), and like Homer’s one-eyed giants ends up, passively in this case, slaughtering and eating the strangers who have wondered into his private domain. By film’s end there is obviously no one left at the bar, filled when he entered. Surely when he staggers out the exit at films end, he is not the same polite listener he was at the beginning of the film, willing to hear out each man’s private tale without attempting to truly correct their phobic fears. After all, even we (or at least I, perceiving this film as a pretending guiding voice) have misread the signs, unintentionally misreading—with the director’s encouragement—as being the exact opposite of what they are. But then homophobes are often deeply closeted gay men.

In short, if you can ignore the raw quality of this homemade-like short film, it is well worth watching.

Posted by greenintegerblog at 6:36 AM