Lionel Soukaz and Guy Hocquenghem’s 1979 film Race d’Ep (the French street term for pederast, sometimes translated as “Breed of Faggots”) must have seemed a grand adventure in LGBTQ filmmaking in its day for its attempt to completely recontextualize gay film art by beginning with the photographs of Wilhelm von Gloeden’s Taormina boys, recreating their photographing through a fictional representation of von Gloeden with the narrative voice of his favorite model El Moro;  then proceeding to unlock the historical facts of the Berlin Weimar Republic’s grand introduction of the concept of homosexuality through the writings of Karl Heinrich Ulrichs and the further research and popularization of what later would be come only part of the LGBTQ+ “rainbow” of sexual representation by Magnus Hirschfeld, and the vast sexual openness of pre-Nazi Berlin whose history had yet been fully outlined; moving on to a sort of collage of not very deeply explored notions of US, particularly California, hippiedom and free sexual attitudes of the 1960s; before finally presenting, in what is perhaps the most narratively interesting of its four parts, a long night trek through Paris by a gay man pretending to show the gay sites of the city to a self-declared straight American business man who is, in fact, more interested in simply hooking up for gay sex, a somewhat self-mocking response to the French intellectualization of gay sex and politics. 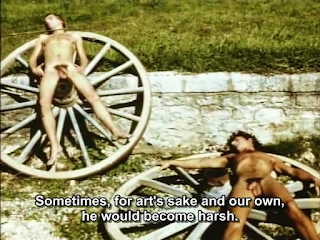 With its assertion of the theories of Michael Foucault and its political activist position, along with the badges it wore for having been outrageously censored by French bourgeois society, Hocquenghem’s and Soukaz’s work is almost smug in its determination to rewrite a history of those, as Hocquenghem puts it, “belonging to another world, another History.”

And indeed, given that only a year before LGBTQ audiences had suffered through Ron Peck’s tortured voyage through British pubs Nighthawks, the nightmarish and thwarted sexual delights of the Turkish prisons in Alan Parker’s Midnight Express, and the tittering sexual hoots of transgender pretense of Édouard Molinaro La Cage aux Folles, La Race d’Ep! most certainly did appear to be an intellectual celebration of a “homosexual century” that certainly the Anglo-speaking world had not yet assimilated.

Broken into four parts—"1890, Le Temps de la Pose,” (von Gloeden played by René Schérer)  “1930, Le Troisième Sexe,” “1960, Sweet Sixteen in the Sixties,” “1980, Royal Opéra,” the last named after the bar in which our gay hero picks up his handsome US businessman, the work as a whole appears to lionize pre-World War II German and Sicilian, and 1960s US sexuality as opposed to the intellectually-laden French response shown in part 4. And perhaps with good reason given that when Race d’Ep was released in France it was classified as a pornographic film and given an X rating. Roland Barthes, Gilles Deleuze, Felix Guattari, Marguerite Duras, Simone de Beauvoir, Patrice Chéreau, and Cahiers du Cinéma, among others, signed a petition in defense of the film, opposing its persecution and censorship by the government. Foucault himself wrote the Minister of Culture and Communication, J. Philippe Lecat:

The Cinema Censorship board has recommended an X rating for

the film titled RACE D’EP. This decision is based on the content of

the second short film which makes up the whole of the film.

This documentary actually rests on historical research that I have

been able to certify the seriousness and interest of. It seems strange

that a film on homosexuality should be penalized for attempting to

retrace persecutions that the Nazi regime was responsible for.

Strange, and maybe worrisome. Many, I think would not understand.

Moreover, pornography starts with exploitation, for the purposes of

commercial sexual misery. It is paradoxical to class as pornographic

a film whose purpose is only to speak out against such misery.

I beg you Mr. Minister to please accept this expression of my very

Today, in retrospect the film seems somewhat tame in its visual images, but certainly was sexually explicit, particularly in its first section, compared with other films of its time. We can now see, however, that underground US directors had explored some far more radical territory by this date; German director Rainer Werner Fassbinder had taken us for more than a decade through the effects of the Weimer Republic and the Nazi extinction of people, cultural values, and intellectual openness on contemporary sexual life; Danish directors Lasse Nielsen and Bent Petersen had begun to investigate in a far less purient and salacious manner than von Gloeden the beauty and challenges of male youth;  and others were exploring by 1979 territory that was perhaps more inclusive. If nothing else, the film’s seemingly blind adoration of von Gloeden’s kitsch representations of his pedophilic desires, its refusal to explore the underlying breakdown of all social order in the Weimar Republic that helped to permit Hitler’s rise, and Soukaz and Hocquenghem’s celebration of  the often complete silliness and political apathetic values of 1960s hippiedom now seem rather embarrassing.

Still, this film must be honored by the LGBTQ community if nothing else for its attempt to assert and valorize an historical record of queer life beginning with photography transformed through the medium of film.

There is also clear evidence in that last section that the directors were quite aware of their  perhaps purposeful naiveté in the first three sections of their film. As critic Greg Youmans has intelligently argued:

“The film is an artifact of the conflicted, transitional moment that was the late 1970s. Schérer has written that Soukaz’s films express both the exuberance of the aprèsmai generation (Hocquenghem’s term for those who came of age after May 1968) and the “glaciation of sensibilities and human relationships” that was to follow, during what Felíx Guattari referred to as les années d’hiver (“the years of winter”).  Perhaps then we are right to think of Soukaz’s films, Race d’Ep included, as autumnal in both their historical conjuncture and their political concerns. In them, we can sense the waning of the halcyon, early-1970s days of gay liberation and the mounting chill as the commercialization and assimilation of gay life sets in (though something far more chilling was on the horizon). In his 1977 book La Dérive homosexuelle (“The Homosexual Drift”), Hocquenghem expressed profound concern over what was becoming of the gay revolution in the face of a late-1970s “movement of closure which is founding new sexual bourgeoisies.”

We feel the contradictions of the era most clearly in the fourth and final part of the film. Here Hocquenghem plays a gay man who, while hanging out in a bar with his friends, decides to cruise an attractive blond foreigner who has wandered in off the street to buy cigarettes. As we watch their encounter, we hear two competing, retrospective accounts of what transpired that night. The off-camera voice corresponding to the blond man is that of a straight-identified American businessman who somehow took a wrong turn and ended up spending the night talking and walking, but no more, with a French gay guy. By contrast, the off-camera voice corresponding to Hocquenghem’s character is that of a queen (“folle”) telling a tall tale of sexual conquest over the phone to a friend the next day. But only the American’s version of events seems to correspond to what we actually see happening on the screen.”

In fact, the clearly closeted “American” is amused by but basically disinterested in the tour and lecture of his intellectual friend—and by extension the intellectualization of Hocquenghem’s own views of gay sexuality—when he was truly seeking out simply a way to get fucked while pretending innocence. 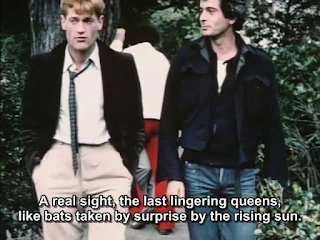 That realization forces us to reconsider the entire movie. Youmans nicely summarizes the questions that come immediately to mind, if Race d’Ep is arguing for a new history of the queer experience who gets to tell that history and what does it include?: certainly this film alone has basically left out female, transgender, and other, undermined, sexual beings.

“As we watch Hocquenghem’s character struggle with his conflicted, self-designated role of porte-parole (“spokesperson”) for the gay community, a structuring logic of the film falls into place. From Gloeden to Hirschfeld to Hocquenghem, the film traces a historical lineage of privileged, cis-gendered gay white men who play the role of patron-doctor-writer-activist on behalf of more marginalized queer subjects. In its historical and narrative arc, Race d’Ep seems to testify to the passing of this paternalistic dynamic. Perhaps the film suggests that a more pluralistic time is at hand, in terms of who gets to speak as and on behalf of queer subjects. But it also suggests the dawning of a more banal era, as queer relationships rooted in differences of age, race, gender, and class are pushed to the margins by a mainstreaming movement anxious to present affirming images of gay citizenship and relationships not riven by imbalances of power and knowledge.”

In the first section El Moro—a boy, it is important to remember who was von Gloeden’s lover since he was 14—keeps describing himself and his beautiful friends as crude, innocent, stupid, and unable to comprehend how their “master” was attempting to transform them into works of great art. He suggests the fact that none of them were paid when von Gloeden began selling his often pornographic postcards was justifiable since the “foreigner” gave them money when their married or celebrated other events. The fact that von Gloeden was kind to women makes him a hero among their mothers and even fathers, who enthusiastically encourage their young boys to work with him. And after all, El Moro proclaims, he brought tourists to Taormina who contributed to the economy. 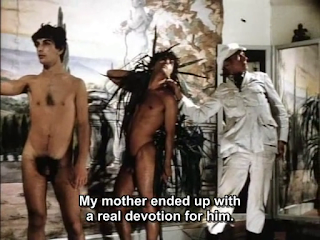 Ulrichs and Hirschfeld persistently described gays and lesbians as being members of a “third sex” instead of arguing that they were simply males and females who preferred sexual encounters with their same gender, and thus still presenting them as outsiders to the normality of heterosexual sex and desire. The movie recounts how Hirschfeld publicly examined and even operated on some of his hermaphroditic patients almost, one imagines, as the Nazis later did (although one must admit with more interest in their own well-being, including helping those who sought full gender transformation). There is a sense in these scenes of his noted Sex Institute as being almost a kind of giant freak show, freely open to other open-minded men of medicine. 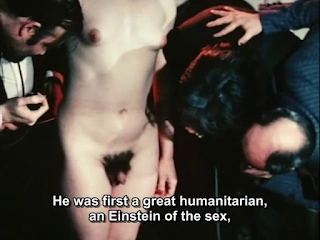 And finally, if nothing else we tire of the endless sunny male and female hippies tripping in the sun to the music of the time in the background. The directors almost have fun with the viewer as they continually click on and just as quickly click off images of male nudes, playing games with their viewers’ prurient desires as opposed to what are otherwise rather boring images of lithe young beings laying around partially clothed in the sensual warmth of their own self-adoration. 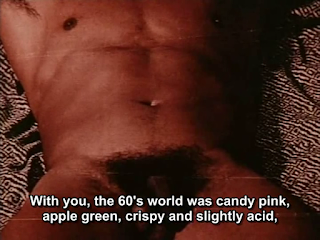 If photography and film, as they argue, is at the heart of what we have left of LGBTQ history— since so many of the voices of gay men, lesbians, bisexuals, and transgender individuals have been quieted through societal rejection, arrestment, imprisonment, and death—who took those pictures? And who helps us to interpret them? That may be at heart why I have described this book as simply “my” queer cinema. It is simply an invitation to share what I have observed and not a statement of how everyone else should interpret what I’ve witnessed and commented upon.

Posted by greenintegerblog at 6:17 AM