Although described by some commentators as a pre-code film, the 1934 movie Hips, Hips, Hooray!, directed by Mark Sandrich, was sufficiently tamped down and straightly cut by censors or the fear of censorship that the final result was, as Richard Barrios describes it, a “denatured” movie, and even then remained along with the same team’s So This Is Africa among Hays Code director Joseph Breen’s biggest targets of the year.

The low-brow comedians Wheeler and Woolsey, known for their throwaway sexual puns, their outrageous racist and xenophobic “jokes,” and their troves of homosexual innuendos, in this film stood almost as naked as their chorines, without any of the substance that had made them lower level comic successes. 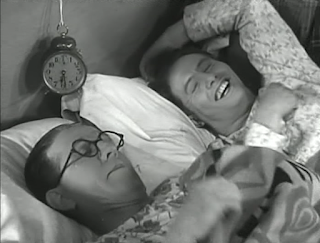 This film still made a small profit, but why—given it’s concoction of unrelated stories about an owner of a cosmetic company, Amelia Frisby (Thelma Todd), her main model Daisy Maxwell (Dorothy Lee) (a friendship so inexplicable we might even wonder if there wasn’t a lesbian aspect to their relationship), their evil manager Armand Beauchamp (George Meeker) who is working on the side with Amelia’s competitor Madame Irene (Phyllis Barry), and the entire casts’ unlikely meetup with the flim-flam salesmen Andy Williams and Dr. Bob Dudley (Wheeler and Woolsey)—is beyond any rational explanation.

The Prescott (Arizona?) Evening Courier, so Wikipedia informs us,  described it as "smartly and enthusiastically insane...surpassing all [Wheeler and Woolsey's] previous efforts." I am sure it had a big audience in Yavapai County.

The comedy is centered primarily around three not so terribly funny scenes, all involving police and detectives: the duo’s takeover of an executive office, sending it’s owner on a wild goose chase of a home fire while they attempt to woo Amelia and Daisy; a pool game with a Detective Epstein (Matt Briggs) and his not so bright assistant Sweeney (James P. Burtis) out to take our “heroes” straight to jail; and a cross country car race where impossibly Wheeler and Woolsey take over the car sponsored by Amelia and her company and win the race by taking outrageous shortcuts via a cyclone, the car hooked to skis sliding through the Rockies, and a final last blast through the California desert on helium-filled tires.

If those impossibilities make you laugh out loud, this is the movie for you!

Oh, there are some more pleasant moments such as when Ruth Etting—who was to have her own subplot, inexplicably cut from the film—sings “Keep Romance Alive” while the mandatory chorines bathe in the nude in on-stage pools of bubble-filled water while others stand mostly undressed nearby. And the scene in which Wheeler and Woolsey finally hook up with the girls in the stolen executive office gets close to camp when Woolsey dons a lampshade as a tutu and the four scamper about the skyscraper roof in mock balletic positions singing “Keep on Doin’ What You’re Doin,” a clever song (originally composed for the Marx Brothers’ film Duck Soup) by Bert Kalmar and Harry Ruby, which unfortunately seems to be the work’s only song other than the ditty we’ve already heard Etting warble. 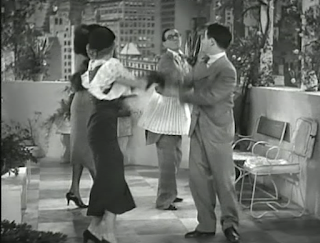 Wheeler and Woolsey wake up in bed together, as they do in nearly all their films, proceeding to make breakfast in their reconditioned car that seems to offer up all the facilities of a modern household kitchen. And the boys, particularly Wheeler tap dance up a storm for a few minutes, suggesting a new number that the choreographer, the pansy supreme Bobby Watson, might introduce to the show. Bobby’s answer, delivered up in his usual fey lisp: “Oh, my girls could nevah do that, they’d bruissse.” When a few seconds latter he puts his hands to his cheeks in his usual eternal frustration we understand it also as a kind of despair for fearing that his career may now be over. Even the empty Wonder Bar had more to offer its LGBTQ audiences than this whimper of a formerly comedically adventurous duo. 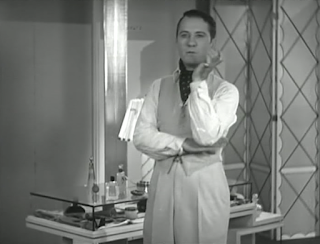 What is clear from this film and others of the year is that LGBTQ individuals are about to become invisible.