Oscar Micheaux (screenplay, based on his novel and play, and director) Body and Soul / 1925

By coincidence, nine days after the 96th anniversary of its release on November 9, 1925, I saw Oscar Micheaux’s classic silent Body and Soul at the Ted Mann Theatre at the new Academy Museum of Motion Pictures in Los Angeles, which happens to be located across the street my home. 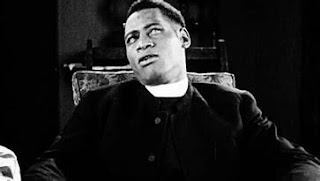 Perhaps the lead character in this work, Reverend Isaiah T. Jenkins (Paul Robeson)—a formerly imprisoned crook who has traveled to Tatesville where, somewhat inexplicably his twin brother Sylvester lives (also played by Robeson), to prey upon this community by portraying a holy man of the Good Book—might make something of the coincidence of three 9s, turning them perhaps on their head—as he does reality throughout this film—to come up with “The Beast’s number,” symbol of the Antichrist. For that is almost what he is in this powerful work. 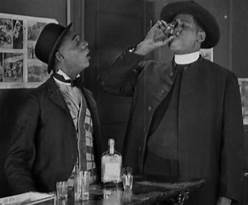 After a particularly long “conversion therapy” session (which might almost describe the scam Jenkins in playing on both the girl and her mother), Martha Jane observes that her daughter is especially distraught, but cannot quite make sense of it, attributing it to mere hunger, hurrying out to get some groceries to cook up a good meal for her “little girl.” 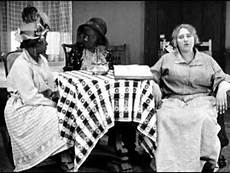 When she returns she finds her daughter missing, and with her pious friends as witnesses discovers that the Bible in which she has been hiding her life savings is empty except for a note from Isabelle declaring she has run away to Atlanta where she intends to hide herself so that mother may never find her and admitting to having stolen her mother’s hard-earned savings.

What one might describe as this crossroads of her faith—whether to believe what she knows in her heart about her beloved daughter or face the cold evidence put before her—is the crux of Micheaux’s domestic folktale made in the context of 1925 for a black only audience. Martha fortunately chooses her heart or spirit over the body of facts, and travels to Atlanta, amazing able to locate and observe her daughter starving and living in a poor rooming house.

As she hugs her sickly daughter near to her, pleading for an explanation to the reasons for her having left home and stolen what eventually would have been hers and her husband’s to have, the loving mother is forced to realize, ironically, the dangers of her own blind faith as Isabelle recounts, against both her mother’s and her own will, the story of Jenkins’ debauchery. 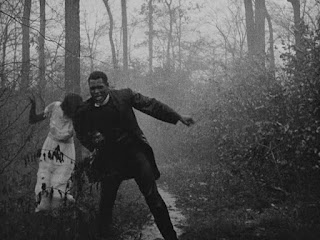 Several months earlier when she and the Reverend had been out on a Sunday afternoon ride in the country, a terrible storm came up, forcing the couple to take refuge for the night in an empty cabin. There Jenkins raped the girl, reasoning rightly that if she dared to tell the truth, no one, particularly her mother, would be believe it.

Later, on his more recent visit, he had violently assaulted her, demanding she show him where her mother had hidden her renowned savings for her daughter’s future, and when shown it, demanded that the girl hand it over to him, once again knowing that Isabelle’s version of the truth would never be believed. 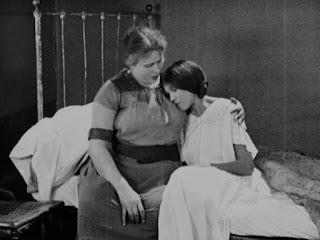 Thinking back on various other strange events, Martha finally sees the truth, but too late since her daughter closes her truth-telling session with her own death, too frail to survive the consequences of her tale.

Returning to Tatesville, broken-hearted, Martha takes the opportunity of the Reverend’s special sermon about judgment day (the “telling of the bones”) to denounce him for his actions in front of his own congregation, alleviating his former jail mate from the responsibility. The church goers rise up in revolt and seek out the fleeing preacher, tracking him down at one point in Martha’s own kitchen, where he has pleaded with her to hide him so that she might save him from his sins.

Martha convinces her pious friends that he is not there, and they leave, the Reverend now on the run again, this time when confronted by another church member in the woods, striking and down and killing him.

Certainly, as Fritzi Kramer in her Movies Silently blog reminds us, such topics as rape, church robbery, fraud, and murder had been the subject of other films as well who dealt with these subjects, as does Micheaux offscreen and reported only as hearsay. But for the censors of the day, these subjects—most particularly by a black creator—were incendiary and, as the censors put it, were “immoral,” “sacrilegious,” and would “tend to incite crime” among its black viewers.

Micheaux responded, according to film historian Pearl Bowser, that there was only one movie he knew of that might accomplish that, D. W. Griffith’s The Birth of a Nation,” a film which the censors had recently approved.

Clearly this was a personal film for the director, who according to Bowser was cheated out of his money and property by his father-in-law, a minister. And Micheaux, struggling with the censor’s demands, winnowed down his film of nine reels to only five before the film was approved. Micheaux’s original cut is considered today as a lost film; we have only his final cut. Of an estimated 26 films Micheaux made, this cut-down version is one of only 3 surviving.

Accordingly, we have to wonder if the original ending was as benign as the final cut is wherein we discover that Martha has only been having a nightmare, sent by God apparently to show her the narrowness of his ways. Having discovered that Isabelle is still safe at home and the money in its proper place, she accepts a second visit by Sylvester who announces that one of his inventions has just been purchased, and shortly he will have enough money to marry Isabelle. 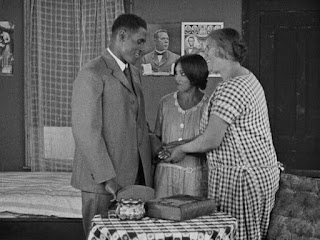 Gathering up her life savings, Martha tells the couple that they won’t have to wait, sending them on a honeymoon whereafter they return to a modern, smartly appointed house she has bought for them and her to live in happily ever after.

It’s hard to know, given this wrinkle in the story, whether or not Reverend Jenkins really raped Isabelle, drank, or had a criminal record. Where does the dream leave off and reality commence? Or, perhaps, this happy ending is really the dream, the other having represented the awful truth. By film’s end we don’t know what to believe, and somewhat like Martha must make a choice between the facts presented and what we feel in our hearts.

In 2019 Body and Soul was finally added to the Library of Congress National Film Registry for works of cultural, historical, or aesthetic significance. This film certainly fits all three of those categories.

Posted by greenintegerblog at 9:28 AM