THE MIRACLE OF OUR EMPTY HANDS

Robert Bresson’s third film, Le Journal d’un curé de champagne, brought him international attention and awards, including the 1951 Grand Prize at the Venice Film Festival. Like his later film, Mouchette, Diary of a Country Priest was based on a novel by the noted French Catholic writer Georges Bernanos, and like that later film, this work is a bleak portrait of French provincial life.

A young priest (Claude Laydu), fresh out of seminary, is assigned to the village of Ambricourt in northern France. Innocent and highly idealistic, the priest feels dissociated from and uncomfortable with his often cynical and crude parishioners. These people are, according to the seasoned priest of nearby Torcy, are a vengeful and mean folk, going so far—as a local schoolgirl, Séraphita tells him—to lace wine with drugs upon the priest’s visit, just to observe him fall into a stupor upon his return home, which, in their gossip, they can portray as drunkenness. The priest, however, has big changes in mind for his community, which, despite the warnings of the Torcy priest and the local count, he attempts to enact, meeting with resistance and ridicule from nearly all. Even his catechism students involve him in their schoolgirl jokes. 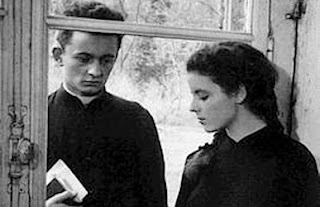 His one regular churchgoing worshiper, Miss Louise, a nanny at the chateau, unintentionally involves him with the family at the chateau. While the husband eventually dismisses the aspirations of the priest, the young daughter of the house further draws him into the life of her family by reporting that her father and her nanny are having an affair. When the priest finally determines to approach the girl’s mother, he discovers a woman who, long aware of his husband’s infidelities, has determined to forgive them at the expense of her own salvation and happiness.

In a long and fascinating discussion about human will in relation to God’s grace, the priest attempts to reconcile the woman to her savior.

Countess: Love is stronger than death. Your scriptures say so.

Curé d’Ambricourt: We did not invent love. It has its order, its law.

Countess: God is its master.

Curé d’Ambricourt: He is not the master of love. He is love itself. If you

would love, don’t place yourself beyond love’s reach.

Miraculously, he succeeds in her returning to her faith, but when she dies that same evening her family and the entire community is even more outraged by his intrusion into this woman’s and other’s lives.

Meanwhile, the priest himself is suffering not only from severe doubts about the power of his faith and his ability to lead this village, but is unable to eat most foods, surviving primarily on bread crusts and the wine into which he has dipped them; in short, he eats only the elements of the sacrament, bread and wine. A trip to a doctor in a neighboring town reveals that he is terminally ill with cancer, and, upon visiting a seminary friend living in that town—a man who, having failed to finish his education, leads a desultory and poverty-stricken life as a writer—the young priest dies after apparently coming to terms with his own failures and recognizing that “All is grace,” that God himself is grace.

Such a plot summary, however, can give one no idea of the power of Bresson’s film, which in scene after scene pits the beautiful, finely-boned, almost monk-like priest (Laydu, a nonprofessional actor, apparently studied the mannerisms of priests and fasted to achieve the wan, fragile look of the priest) against the everyday commonness and earthiness of these village folk. The film begins with an image of young couple in the midst of a lusty kiss, breaking away from each other as the priest enters their terrain. The nearby priest, a hard-headed pragmatist, has few delusions about the people, and it is clear that he has survived only because he has demanded petty obedience to the church’s laws as opposed to sweeping change. The local doctor, Delbende—one of the few men of intelligence of the community—has apparently never heard of Semmelweis and antiseptic techniques. He literally looks and smells of the earth, and returns to the earth by killing himself.

The priest is clearly an aesthete, a man not of action but of symbolic acts and a spiritual language that in contrast to the community he is attempting to serve often appears—as well as to the film’s audience—to come out of nowhere, as if he were speaking in tongues. If nothing else, his highly pitched intensity, revealed in long narrational passages as he is seen writing his diary, seems utterly at odds with the everyday events and behavior of his surroundings.

As in many later films, Bresson focuses on bodily parts, particularly the hands, to help engage the reader in the priest’s sense of displacement. Throughout the film, the priest’s hands seem almost to flutter into motion (with many the sexual connotations that word suggests) while those around him stand stolidly against or stomp into space. 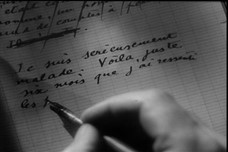 The priest is clearly an aesthete, a man not of action but of symbolic acts and a spiritual language that in contrast to the community he is attempting to serve often appears—as well as to the film’s audience—to come out of nowhere, as if he were speaking in tongues. If nothing else, his highly pitched intensity, revealed in long narrational passages as he is seen writing his diary, seems utterly at odds with the everyday events and behavior of his surroundings.

Moreover, he speaks of the role hands have in his beliefs, recalling the hands of “the virgin rocking the world’s cradle,” and, as he lifts the countesses’ veil as she lies upon her deathbed, rhapsodizing: “Oh, the miracle of our empty hands!” in his apparent startlement of discovering the effect—having blessed the countess at the end of their conversation—one can achieve, despite his feelings of inadequacy, with a simple touch. 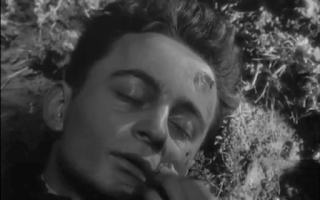 Part of the dilemma of this man’s life is that no one dares to show him love or even encourage his acts. Only once or twice is he blessed by the touch of other’s hands, the most important of these  moments being when Séraphita discovers him face down in the mud, and he awakens to the touch of her washing away the blood and mud from his face before pulling him into the safety of a temporary hiding place where we can comfortably sleep off the drug-laced wine he has drunk, gently stroking blueberry juice on his cheeks so that can explain his “drunkenness.”

The second such event is when a relative of the count invites him to ride on the back of his motorbike, and with hands intently placed upon the handlebars, takes this man of god on a wild ride, so delighting the priest that we suddenly recall he is after all a young boy who might, had he chosen another path, be thrilled by life. 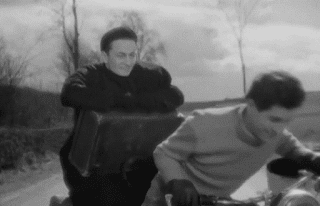 In that exhilarating ride, moreover, Bresson presents us with one of the most homoerotic scenes possible, forcing us to see just how desperate this lonely man is for the touch of another human male body. Not only do we suddenly see him as a young boy, but as a kind of angel who has been trimmed down, wings included, to represent what the older priests have long ago become. As if we might miss the rapport between the two young men, the motorcyclist, when he reaches his destination, turns to the priest to say “To bad you’re leaving. We could have done this again,” as the two actually have experienced a kind of sexual release in the ride. And perhaps they truly have.

In the isolated village of Ambricourt there is no one to embrace—not only sexually, of course, since he has taken the vow of chastity—but symbolically or spiritually, the only methods left to him. The emptiness with which he faced is indeed the disease which kills him, a cancer which leaves him equally with an empty stomach. Despite his own dying perception, we can only ponder why he was offered so little earthly grace.

Posted by greenintegerblog at 6:38 AM