Noted Chinese director and studio head Wu Tianming filmed The King of Masks in 1996 after his return to China after a period in the US, where, at one point, to financially survive he worked in a video store. Although outwardly the film is not precisely political, it still has many political overtones, particularly with regard to the Chinese treatment of women and the long familial preferences for boys instead of girls. Indeed, gender is very much at the heart of this work. 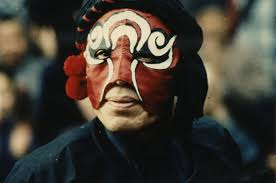 Street-performer Wang (Zhu Xu) is an elderly master of the art of mask changing. While he tells stories, he quickly snaps masks to cover his face with such speed that his audiences cannot even discern the moment of the sudden transformations. Like magic this “king of masks” is transformed from character to character, marveling his viewers enough to eke out a meager living. As an itinerant performer, Wang lives on a small dinghy.

During their meeting he suggests that Wang join his company, but the old man insists he prefers to work alone. Accepting his decision, the impersonator suggests that he least he seek out a male heir, necessary by tradition, to whom he might pass on his bian lian artform. 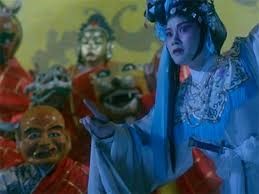 Wang, once married and the father of a son who died in childhood, determines that he should follow the great opera performer’s advice. Visiting an illegal “baby market,” Wang is accosted by dozens of children desperate to find a new home, some willing even to work for free if only they are adopted. Yet the majority of these are girls, and Wang prepares the leave the dreadful place.

But as he begins to leave, a young boy cries out “Grandpa!” several times, forcing Wang to turn around and look. Taken with the handsome boy, Wang pays a few coins to the man who apparently is her desperate father and takes the child home to his houseboat, immediately feeding the nearly starved boy whom he names “Doogie” (Gua Wa), delighted to have finally found an heir. 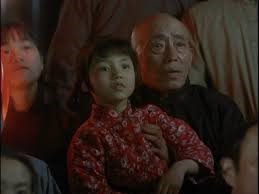 In the middle of the night, as the child wakes to pee, we realize, however, as Wang soon also comes to perceive, that he has been tricked: that his “doogie” is a girl.

At first he attempts to outright reject her, but having already grown fond of the child, he accepts her back as someone who will cook and clean for him. And, although he will not attempt to teach her his art, he does train her to become a contortionist who successfully performs alongside him.

One day when Wang is out, Doogie opens his box of masks, accidentally setting one of the masks and the entire boat on fire. Although she saves his box of masks, she is terrified of his anger and runs away, attempting to live on the streets. Suddenly she is kidnapped by professional child snatchers whom earlier on we have observed stealing a boy from a wealthy family, and is asked to care for the crying child. As the kidnappers drink below, she and the child sneak out through the roof and escape. Doogie is determined to bring the boy back to the man she now calls “Boss” as a gesture of reconciliation.

Wang is delighted by the “gift,” but soon after is arrested by the police and imprisoned for kidnapping. Doogie visits him in jail, bringing him his masks; but, now sentenced to death, Wang remains desolate.

When Wang’s impersonator friend hears of his sentence, he attempts to influence an admiring general to free the old man, without success: the general will not enter into a local police matter.

During one of Zhao Zhigang’s performances, Doogie ties herself to the rafters and, at a dramatic moment threatens, as she has seen the performer do before, to dive into space, demanding  her “Boss” be freed. When the general in attendance turns to leave, she dives while Zhao Zhigang leaps up to save her, both of them rolling down a long staircase where, having observed the bravery of the young child, the general is finally convinced of the girl’s statement that she brought the young boy to her “grandpa” rather than Wang having stolen him. 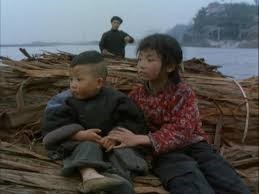 Together again on the dinghy, Wang tells the girl she, once more, can call him “grandpa” and begins to teach her his bian lian artistry.

In short, in Wu’s film it is only through the collaborating efforts of the man who plays the role of a woman, and a young woman who has attempted to play the role of a male that tradition is resisted, love winning out over sexual prejudice.

Just below the surface of this beautifully composed and touching film, however, is a frightening world of child abuse and implied sexual perversity. At one point Zhao Zhigang offers his remorse that he is only half of a man, and Doogie admits to Wang that she has been sold into slavery and been beaten by several men before him. The man who sold her was not her father.

In that respect, many of the figures of this film, symbolically speaking, wear masks, altering their true identities and genders in order to survive.

Posted by greenintegerblog at 3:28 AM