If any film reveals that MGM Studios were issuing absolutely false information regarding their former star John Gilbert’s box-office potential with the rise of the talkies, it is Fast Workers (1933), directed and disowned by the daring Tod Browning, wherein Gilbert not only makes clear that he does not at all possess a “squeaky” effeminate voice, but that he still had a kind of male animal magnetism that was not so very different from Clark Gable’s. 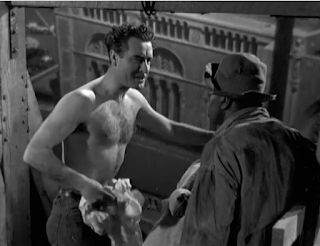 Yet his film almost purposely takes him back into a somewhat similar situation that he portrayed in his earlier hit film, Flesh and the Devil of 1926. Here also Gilbert, as the character Gunner Smith, a high rise building riveter, has a longtime closer-than-normal male relationship with his fellow worker, Bucker Reilly (Robert Armstrong). Both, superficially, are straight womanizers, particularly Gunner who is of the “love ‘em and leave ‘em” variety; while Bucker falls desperately head over heels with his women, becoming so gullible that he wants to marry each and every girl who is ready to pocket his substantial life savings ($5,000) along with the ring.

As his best “bro,” Gunner time and again is forced to step in and easily romance the woman to prove to Bucker the pliant readiness for any sexual coupling of his friend’s would-be wives. But Bucker is such a true believer that amazingly he never catches on, even when Gunner, when observing Bucker about to stray, tosses a silver coin at a woman’s feet, who recognizing it merely as an attempt to get her to bend over and reveal her shapely legs, grows furious with Bucker who she believes has dared to offend her with such a cheap trick. In a world in which women, being unable in the depression to find jobs to support themselves, are all seemingly “on the take,” Bucker believes nearly every girl is a well-meaning virgin, whereas his friend seemingly recognizes them all as “tramps.” 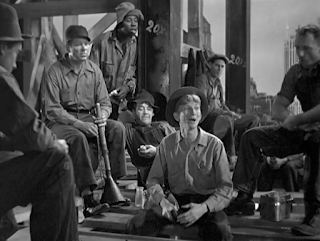 The pattern is repeated so often that it has almost become legend for Gunner and Bucker’s gossipy construction friends, particularly their young tag-along dreamer buddy Pinky Magoo (Sterling Holloway), at his very best in this role, as he tells of their adventures in various cities over and over again. Indeed Gunner and Bucker, along with Pinky, share an apartment. In a very real sense they are a male couple as deeply linked as the air force bomber buddies of William Wellman’s Wings, the later film-versions of Butch Cassidy and the Sundance Kid, or even the Flesh and the Devil duo Leo von Harden (Gilbert) and Ulrich von Eltz who having fallen in love with the same woman (Greta Garbo) eventually pair up and retreat to their own “island of male friendship.”

Many of the reviewers of the day felt that Gilbert was miscast as Gunner, but in fact, in many respects, in Fast Workers he simply played out a role similar to the earlier work, sans Greta Garbo, the third member of their ménage à trois being Gunner’s favorite prostitute, Mary (Mae Clarke). Had he known immediately that his friend’s new love was Mary, he most certainly would have jumped in at once to stop it, admitting his past dalliances with her or showing her up to be the gold digger she is. But this time around Gunner has been busy with other issues, including a recent arrest for battery of a bar patron on which he has had to ask Mary to pay for his fine.

When he does find out that Bucker and Mary are about to wed, he whisks her off to Atlantic City, tracing their tracks with tourist photographs in order to prove to his friend that, once more, he’s chosen the wrong woman.

But Mary is different. On the one hand, even though we know she is acting, Clarke is truly convincing in her portrayal of a stock “poor innocent with a sick, dying mother,” even if she has to keep slightly shifting her story to cover any suspicions Bucker may have of her. And despite her tricks, of which Gunner has long known, he too finds her attractive and different from all the others, the tough cynic actually falling for her at the very moment he is attempting to betray her to his best friend. The result is a most unpleasant weekend get-away where Gunner gets drunk and violent in the process of betraying both people whom he loves.

What he doesn’t realize is that this time Bucker has seemingly outwitted him, having already married Mary. Upon returning to New York to show off his photographs, accordingly, he doesn’t know that this time the “save” is too late. Bucker has already fallen in love so deeply that instead of getting “wised up,” he falls into an angry stupor, and arranges for his friend to fall from the plank that provides the only walkway during their job at riveting the beams high up in the sky. 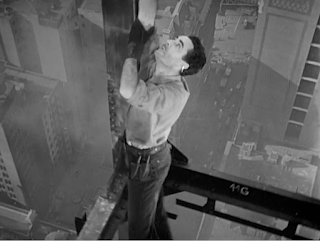 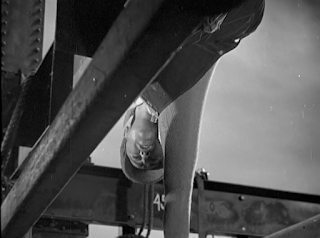 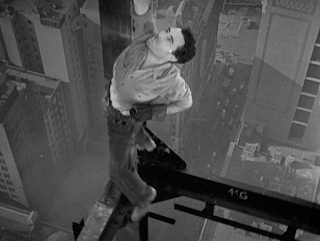 Although, he desperately struggles to save his falling buddy, and to pull him up to the safety of and back into his arms, his sweater literally rips as Gunner falls, possibly to his death.

Mary is convinced not only that he has done it on purpose—as we know he has—but that his attempt to save him has also been a bluff, of which, having observed his sky high struggles, the audience cannot be certain. Furious, she confesses her sins, letting him know that she’s “anybody’s girl,” and even threatening Bucker with a trial if Gunner dies. But Gunner’s deep love is also made clear in the process, he humbly answering, “If the Gunner dies, you won’t have to see no lawyers,” suggesting that he will either turn himself in as a murderer or possibly even commit suicide.

When the two finally speed off to the hospital after word comes that Gunner may not survive the afternoon, they find a man determined to live and not only to forgive his loving friend, but to convey through a coded message, that he too is in love with Mary, while at the same time sending her away in preference for his male companion.

Insisting “The patient is not gonna die,” Gunner goes on to admit or possibly invent a similar situation that he has endured when he “drooped a guy once” and went on blaming himself, imagining himself as a murderer. Bucker attempts to tell him the truth about the plank, but Gunner won’t allow him to finish, suggesting that “it’s what you’re gonna do from now on.”

Shocked by Gunner’s open commitment to a future with Bucker—almost a kind of marriage proposal, a statement of their continued relationship—Mary snidely shouts out, “Now if that ain’t the pay off! You ain’t gonna smoke this sorry stuff? You ain’t so dumb that you don’t know that he tried to drop you?” Gunner demands the nurse to “throw this noisy cluck out.”  He continues: “There’s a guy in here who you’ve cut right into his heart. Now will you please go away and leave him alone.” 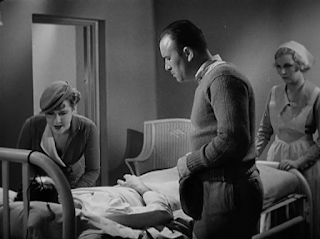 Bucker may surely believe he’s talking about him, sending Mary away because of the wrong she’s done the innocent lover, but the hard-headed dame gets the message loud and clear, announcing “I getcha. I’m out. I take my bow.” She knows that Gunner is now her "man that got away."

Bucker admits, “She certainly had me fooled. But there will never be another fooling me.” The very next moment as the good-looking nurse tells him that he needs to leave soon, Bucker becomes immediately enchanted. Gunner takes a quarter from him and throws it at the girl, who turns angrily to Bucker asking, “Now did you have to do that?”

Bucker is again nonplussed, while Gunner apologizes, “You’ll have to forgive him. He was born with a dirty brain.” It’s clear he’ll have to keep close watch over him if they want to live cleanly in their own version of the “island of male friendship.”

Richard Barrios mentions this film only because in the original viewing, Armstrong as Bucker seeing a female couple sitting together in a speakeasy observes: “They’re making it tougher for us every day,” a quip that the Hays Office later ordered to be cut; it did not show up in my DVD.

But evidently both Barrios and the Hays Office missed a far more telling quip. When Gunner and Bucker show up to the speakeasy, Bucker discovers a new hatcheck girl at work, asking “Where’s Miss Pansy.” “Her” replacement answers “She had a nervous breakdown. Started seeing dimes in her sleep.” The joke is a double layered one, suggesting on the literal level that instead of tipping quarters the previous hatcheck’s customers where paying only in dimes, not enough to survive on. But it also hints at the Hays Office determination, given the gossip regarding The Warrior’s Husband being shot at the same time, to ban all pansies in film, further implying that their roles had already been whittled down to brief appearances as in several of the films I discuss.

But then both also missed the real truth about this film, that it was already a subtly coded film, turning the buddy genre, as had Wellman and others before it, into something closer to a serious study of a male on male love tale. Even as they meet up with the hat check girl, Bucker immediately taking interest in her, Gunner interrupts Bucker’s question about how long she’s been working at the place:

Gunner Smith: To shorten the story, sister, what he wants to know is what time do you quit work?

Virginia: Five AM in the morning. 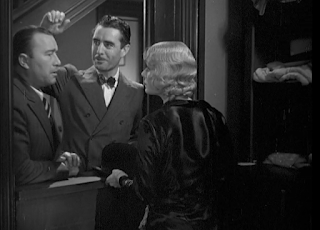 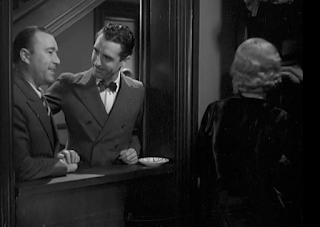 And as Gunner puts the kibosh of his friend’s attempt to make a date, he affectionately rubs his hand across the top of Bucker’s head as if to tell the girl that “he’s all mine.”

When discussing their relationship with their fellow worker’s earlier Bucker makes it clear: “Gunner and I ain’t gonna marry any woman until the other proves she’s innocent.” And since Gunner believes there are no innocent women....it stands to reason what the film’s publicists put more clearly: “They were not the marrying kind, so they agreed that neither one could wed until his pal had tried to win his girl away! The funniest love-test ever made, with thrills and laughs galore when they both fall for the same girl!”

Even up into the 1980s the phrase “not the marrying kind” was the standard code for saying “He or she is homosexual.” And obviously anybody who carefully watched this film would not find their “love-test” in any way “funny.”

The movie did terribly at the box office, perhaps because people didn’t understand why the boys didn’t end up with the girl, despite her obvious faults. All the reviewers seemed to like Mae Clarke, while dismissing Gilbert. Surely Louis B. Mayer, who’d been complaining about Gilbert for a long while by then, probably because of his high salary instead of the pretense of his voice, was happy for the film’s failure. This was Gilbert’s last film for MGM.

Posted by greenintegerblog at 10:37 AM