Travis Cook’s 12-minute film 5 Telephone Conversations demonstrates both the technological possibilities now available to resolve gay loneliness as well as exploring the fact that the telephone- / now cellphone-world can also be the cause of isolation and the feeling of being separated from life and other human beings.

John (Mick de Lint) rings up Korey (Brian Colbert Kennedy), the two obviously having connected up previously on a website. They begin with the simplest of details, the sound of their voices, Korey somehow sounding different from what John had expected which, so Korey claims may be the result of a childhood speech impediment. From their they quickly move on to their likes in music, both sharing fairly eclectic tastes. The question of how tall Korey is (5, 11) quickly metamorphoses into a discussion of what size of guy they like better, John, who has dated a 6 foot, 5 inch-tall boy suggesting he likes them better shorter because he can look into their eyes, the sight of the irises blinking providing him some sense of their existence and reactions. He finds it “hot,” preceding to ask Korey what he’s looking for. Korey denies he looking for anything, but John insists that it’s he is, the other emphatically insisting that he is not looking for sex. John laughs, responding that he never mentioned sex, the insisting that subject, however, was behind his question, which John denies. Korey, obviously already suspicious, hangs up. So ends phone call number 1. 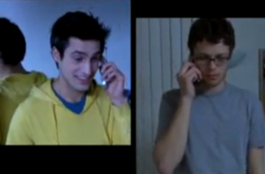 In the next call made by John he immediately asks Korey if he is married, has a boyfriend or a girlfriend, to each question Korey responding “no,” John declaring “I’m harmless you know.” They both agree that they are just getting to know one another, a process they both claim to like. Korey suggests that they might meet, to which John immediately agrees. But then suddenly Korey makes a kind of confession that reveals something far deeper about him. He spends all day inside his room, he reports, staring out at power lines outside his window. He imagines several times each day that a huge earthquake hits Southern California. “I grab my lamp, break my window, jump onto the telephone pole. The whole building disintegrates behind me. Everything collapses but the power lines. And it’s relieving.” John does not know how to respond, but they agree to meet the next evening.

John calls again, this time from a bar, asking Korey where he is, Korey responding he’s at home. Quite the opposite of what we might have expected given his seeming gregariousness, John admits that he’s led Korey on. He tells everyone of his several phone correspondents—which number so he admits in the hundreds, although in the present there are perhaps only 20—that he’s going to meet them, but he seldom does. He thinks, he confesses, that perhaps Korey is too nice for him. Korey picks up on the fact that his telephone companion is probably drunk. Although he usually doesn’t drink, John insists, the only reason he has is to be able to call Korey, Korey responding he has no reason to talk to him now. “Well then, hang up!” John goes on to explain that when he’s drank he becomes honest, insisting that he and Korey are probably the most lonely people he knows. Korey: “Yeah. Well, that’s easy. I know how lonely I am.” John: “God I hate drinking.” Korey: “You need a ride or anything?” John hangs up. 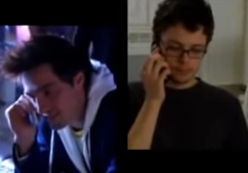 Korey calls the next morning, John apparently having slept in his car where he still is, having not even remembered that he drove home. He stumbles out of his car, Korey reminding that he offered to pick him up. Korey has thought about John comments, and now wonders how John could be lonely, he quipping that “having a lot of nothing is still nothing.” John wonders if Korey’s still work since it’s 10:30, to which Korey responds quite nonchalantly, “They said I had to be out of the building by the end of the day, but I didn’t have people to say goodbye to.” “So you got fired?” I want today to mean something, Korey suggests, continuing, out of nowhere it seems, “I think I’m going to become a pilot. ...When you think about, once you take off, all you’ve got is sky and clouds.” Asking him what Korey’s last name is, he salutes “a new day for Corey Larson.” Asked, in turn, about his last name, John hesitates, but finally reveals that it’s Turner. “Thank you for sharing that with me John Turner. Hold on, here comes one,” Korey holds the phone into the air as a jet comes in for a landing, revealing that he is obviously near LAX, the Los Angeles International Airport: his favorite place in the world, as he describes it, They both hang up this time in unison. 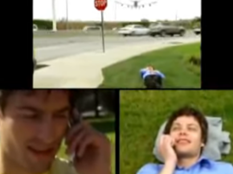 Their final, the next evening, concerns their roots, Korey explaining that he is from Chicago via Arizona and Minnesota. John picks up on the Arizona mention, “What part of Arizona?” “Scottdale.” John went to Foothills High School, Korey to Sabino for a semester, rival schools they both admit. Korey asks he knew his girl who was his neighbor. “Do you ever miss it there?” he asks. “No, not really,” John answers, with Korey adding, “Me neither.” Korey wonders in the five months he lived there whether they might have seen each other. It’s possible, John grants. Korey likes the idea and John likes the idea as well. Korey asks the question which by this time this film’s audience has been asking, does John think they will ever meet. John wonders whether he truly wants it to happen, and Korey insists he does. John: “Then we’ll meet.” 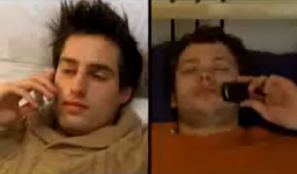 It is only in this very last scene that we witness the boys, both wearing shades of burnt umber, rust and brown and both finally stretched out in equal film definition side by side.

These two lost boys at least end this gentle film with a ray of possibility that they both might come out of their obviously frightened or hurt selves long enough to realize that they are, in fact, perfect for a friendship, if not a relationship filled with love. These two clearly are not going to move toward one another very quickly, or perhaps they never will. But in these phone calls, at least, they have finally reached out and admitted they need one another or others like the other one who might allow them fuller worlds in which to share their lives.

Reprinted from World Cinema Review (May 2022).