Made in Vienna in 1927, the Austrian film Andere Frauen (Different Women) is described as lost, unfortunately stealing from cinema history perhaps the first openly lesbian film.

The film was released on November 23, 1928, the press screening serving as a test for what appears was a very hesitant producer. Only two reviews were published, describing the film in somewhat contradictory terms and certainly through different perspectives.

Kino-Journal described is as being about a “love against nature.” Script writer Franz Pollack was mentioned but not the fact that the work was based on a novel by Hugo Bettauer, Das entfesselte Wien (Umbridled Vienna) published in 1924.

Paimann’s Filmlisten, also a film trade journal, characterized the story as being about an attaché of the former government of the Ukraine who marries a wealthy Russian woman who agrees to marriage only so that she might rise in society, while in truth is has an “unnatural affection” for another woman which keeps her from performing her duties as a wife. Meanwhile, her daughter falls in love with her stepfather. Her mother and her female lover are murdered, leaving “a happy-end for husband and daughter.” Obvious, in its homophobia we’re missing something in the plot. 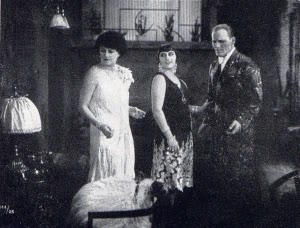 The Kino-Journal wrote: “Sonja Gordon (likely performed by Rina de Liguoro), an eccentric and beautiful woman and mother of a charming daughter lives in an intimate relationship with Magda (Vivian Gibson) whose beauty has her in its grip.” Sonja Gordon, destined to be a courtesan rather than a mother, wants her daughter to marry Sascha Radim, an “unpleasant” Russian whose ties to the Russian government could help to get back her indebted estates there.

In concurrence with the Filmlisten the article also suggests Sonja married her husband Paul for social reasons. Her daughter falls in love with Paul (Oskar Beregi), described as “a man of the world.”

Sonja is evidently also in possession of a letter which proves that Radim is ready to betray his country, and to retrieve it Radim murders Sonja and Magda, leaving the door open for the daughter and her stepfather to become a couple. 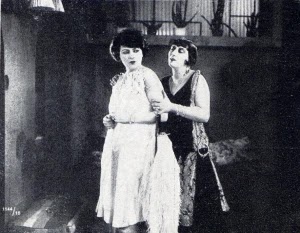 Certainly the Kino-Journal reacted less homophobically that Filmlisten, reporting that the story was one “seldomly told,” but concluding that Franz Pollack had written an interesting and distinctive screenplay. “The film offers luxury and beauty and on the other hand so much misery as one never would expect in such circles.” What they might have expected or of what “circles’ they were talking about one is not certain.

Apparently Brettauer’s novel has a different focus from the film. In the fiction the character named Paul Mautner, named Paul Glinsky in the film, is the focus, not Sonja Gordon as in the film. The film clearly influenced by Anders als de Anderen, obviously stimulated director Heinz Haus and his writer to attempt this work, but apparently at the last moment the producer lost his nerve, changing the film’s title to Schwüle Stunden (Sultry Hours), instead of the more obvious reference to the Richard Oswald movie.

Working as a journalist in Vienna, New York, and Berlin, Bettauer published several fictions that argued for liberal and radical social changes. His fiction Die freudlose Gasse (Joyless Street) was turned  into a film by G. W. Pabst in 1925, starring Asta Nielsen and Greta Garbo. In the same year he was killed by a Nazi fanatic for his advocacy of anti-Semiticism, particularly as expressed in his biting satire Die Stadt ohne Juden.

Despite his support of woman’s sexual liberation, however, Brettauer described his lesbian characters as spoilt perverts despite the fact that he agreed that they were strong and independent enough to question the patriarchal domain.

Oddly, director Heinz Hanus had become an underground member of the still illegal Nazi Party in Austria by 1935. Hanus apparently drew up lists of Jewish members of the actor’s union, later handing them over the Gestapo in 1938, assuring their deportation to the concentration camps. Never called to task for his behavior, Hanus died in 1972. Hanus made over 21 films, one of the The Arsonists of Europe which featured among other historical figures Oberst Redl, the gay Austrian military traitor.

Given the beliefs and attitudes of both Bettauer and Hanus it is amazing that this film was ever made, although the murder of its two LBGTQ characters seems inevitable, another statistic in Vito Russo’s gory list of dead and murdered queer characters in film.

(This essay was based on an on-line commentary by Hans Scheugl).

Posted by Dougas Messerli at 3:51 PM